Traveling around the township of West Goshen, it is sometimes difficult to locate historic homes and buildings. Over the years, many cherished structures rich in local history have been demolished to make room for the future. It is always sad to watch historic homes transform into piles of rubble. Although it may seem that more of our local history is slowly disappearing than is being saved, there are still a few glimmers of hope.

Many residents of the township, who often travel along Westtown Road, may have never noticed a stately structure hiding behind a curtain of evergreen trees. The Matlack House, situated near the Chester County Government Services Center, is a wonderful example of local history that has been saved from the wrecking ball. The county owned house has been stabilized and preserved over the past several years to prevent further deterioration. This preservation project would not have been brought to life without the leadership of the Chester County Commissioners. The West Goshen Historical Commission gives thanks on behalf of the township to the county commissioners for their support of preserving local history. Some of the many preservation efforts that went into the home included installing a new roof, stabilizing the foundation and walls, covering the home with new stucco, and removing all asbestos materials.

In a 1785 deed, “Isaiah Matlack and Mary his wife for and in consideration of the natural love and affection which they have for their said son George Matlack” gave him 154 acres of land. This property would become the site of the Matlack House. The present house can trace its history back to 1786 when a two-story, three-bay brick addition was added onto a log structure. The bays of a home refer to the number of windows that are seen on the front of the house. As the years went by, it was decided that the log structure needed to be improved. A two-bay stone addition in 1811 replaced the log structure, which transformed the home into its current appearance. Many of the farm houses within Chester County began as small log or plank houses. As each generation of farming families continued to prosper, additions eventually transformed the houses into grand five-bay central hall homes.

Many visitors to the Matlack House may assume that the side containing a single-door is the front, but it was originally the back of the home. It may seem odd to have two doors on the front of the Matlack House, but this was a common occurrence. During the eighteenth century, the front façade of country homes also often faced south. When each half of the house was constructed, a new entrance door was included. One entrance was often used for formal occasions, while the other was devoted to daily use. Subtle details of a historic home can tell a story of the past. Upon close inspection of the house, it can be seen that the 1786 portion of the home contains six-over-nine windows, while the 1811 addition includes six-over-six windows. A six-over-nine window was designed with six panes of glass on the top sash and nine panes below. Since larger pieces of glass were often more expensive, installing more panes with smaller dimensions helped to reduce construction costs. As time went on, glass slowly became less expensive.

Watching the preservation of this historic structure within West Goshen Township gives hope that more of our local history will be preserved. Although it may appear that our township includes extensive twenty and twenty-first century construction, we are still surrounded by history. As you travel around the township, make sure to look out for other historic properties. 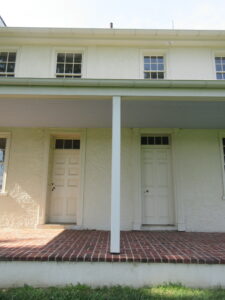 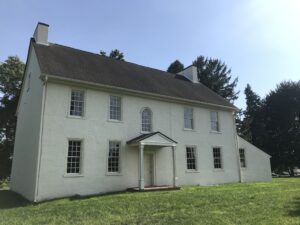 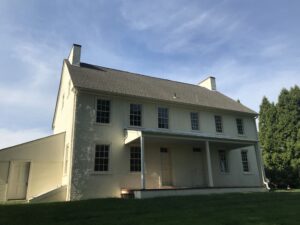